Pfizer and Moderna vaccines cut the risk of getting sick with COVID-19 by 94%, the largest real-world CDC study confirms – and just one dose reduces the odds of illness by 82%

COVID-19 vaccines made by Pfizer and Moderna reduce the risk of getting sick from the virus by 94 percent, according to real-world data form the largest Centers for Disease Control and Prevention (CDC) study to-date.

Only six percent of COVID-19 cases among more than 1,800 health care workers were in people fully-vaccinated with one of the two mRNA shots, according to the new study, released Friday. No one included in the study had had the Johnson & Johnson vaccine.

The study was only designed to test whether the vaccines prevented people from getting symptomatic COVID-19, but the fact that only a small fraction of the group who tested positive were fully vaccinated suggests that the shots likely prevent infection and transmission – not just illness.

‘This report provided the most compelling information to date that COVID-19 vaccines were performing as expected in the real world,’ said CDC Director Dr Rochelle Walensky in a statement accompanying the new study.

‘This study, added to the many studies that preceded it, was pivotal to CDC changing its recommendations for those who are fully vaccinated against COVID-19.’

It was among the pieces of evidence that the CDC drew upon in updating its guidance for fully vaccinated Americans to say that those who have had all their Covid shots can safely go without masks outdoors or indoors, with a few exceptions including crowded places like planes and buses.

Only six percent of COVID-19 cases among more than 1,800 health care workers were in people fully-vaccinated with one of the two mRNA shots, according to the new CDC study 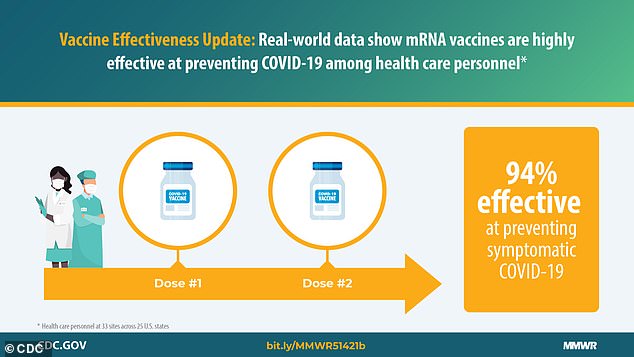 The study drew upon a network of more than 500,000 health care workers.

Its data was whittled down to 1,843 participating nurses, doctors and hospital staff, all of whom were likely exposed to COVID-19 on the job.

Among the group, there were a total 623 people who had tested positive for COVID-19 and had at least one symptom of the infection, and 1,220 people who tested negative.

Only 40 out of the 623 people who tested positive had been fully vaccinated.

That suggests (but doesn’t prove) that fully vaccinated people are five times less at-risk of getting COVID-19, and translates to a vaccine effectiveness of 96 percent. 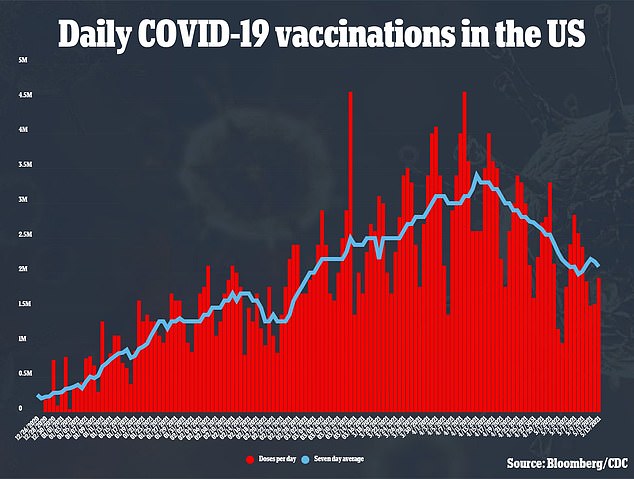 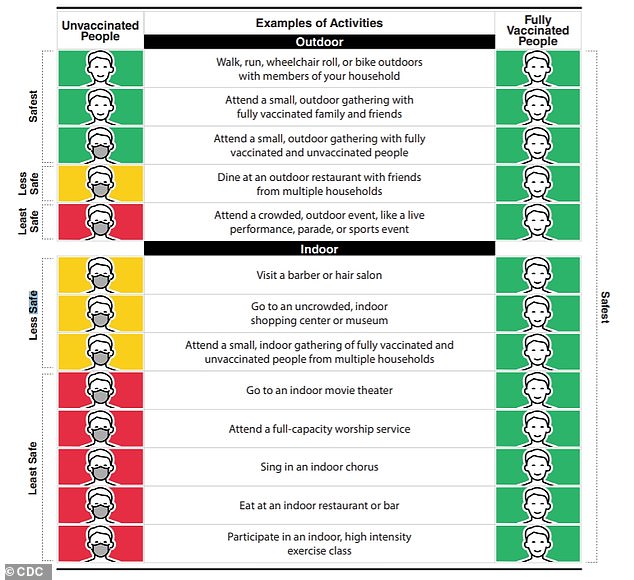 IN THE GREEN: CDC’s updated infographics shows that fully vaccinated Americans can safely do just about anything without wearing a mask 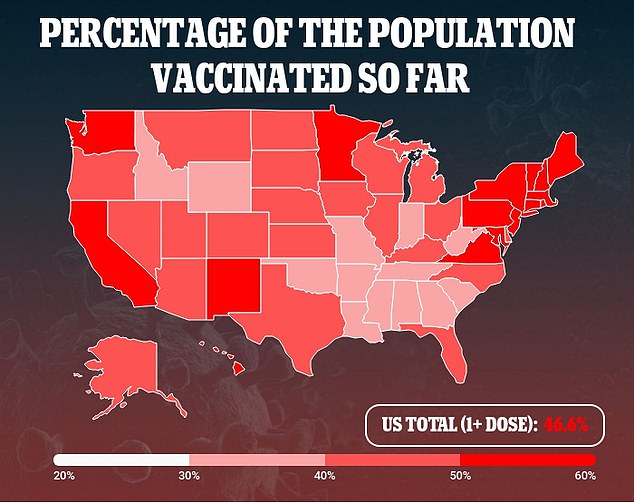 However, the study did not include people who tested positive for coronavirus but never showed any symptoms, so it can’t prove that the shot prevents infection.

Altogether, this means that even a single dose was 82 percent effective against preventing symptomatic COVID-19.

People who tested negative were twice as likely to have had a first dose compared to those who tested positive and had symptoms.

That’s much better than what was found in Pfizer’s own clinical trial, in which a single dose appeared to prevent just 52 percent of symptomatic illness. 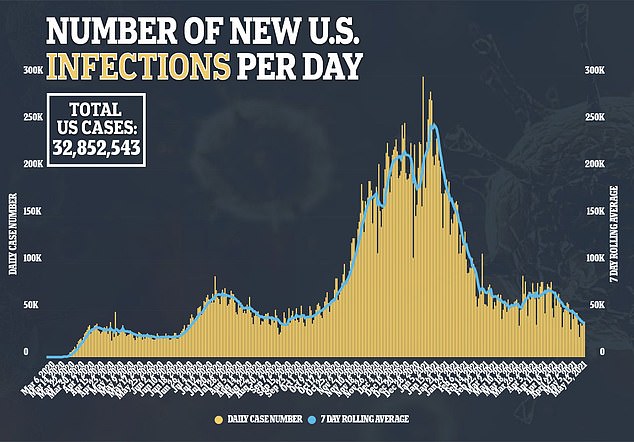 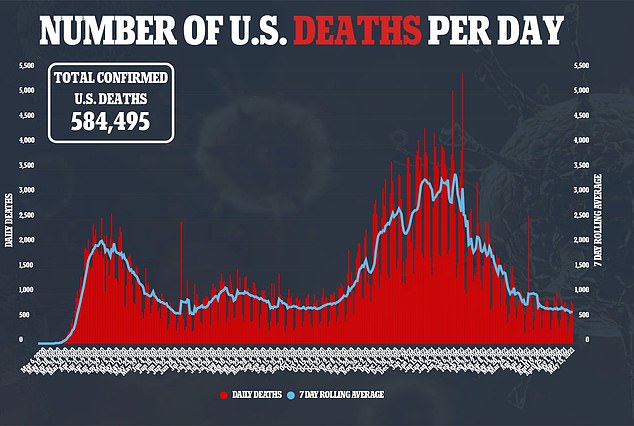 However, UK data found that one shot prevented about 72 percent of illnesses 21 days later.

To-date, more than 36 percent of Americans have been fully vaccinated against COVID-19 and nearly 47 percent have had at least a first dose.

In other words, the risk of getting ill from COVID-19 has been reduced by 94 percent for more than 120 million people, and 155 million are at 82 percent less risk of getting sick.

Along with other studies, the new research was enough to convince the CDC that fully vaccinated people can go maskless and be at minimal risk of falling ill from COVID-19. 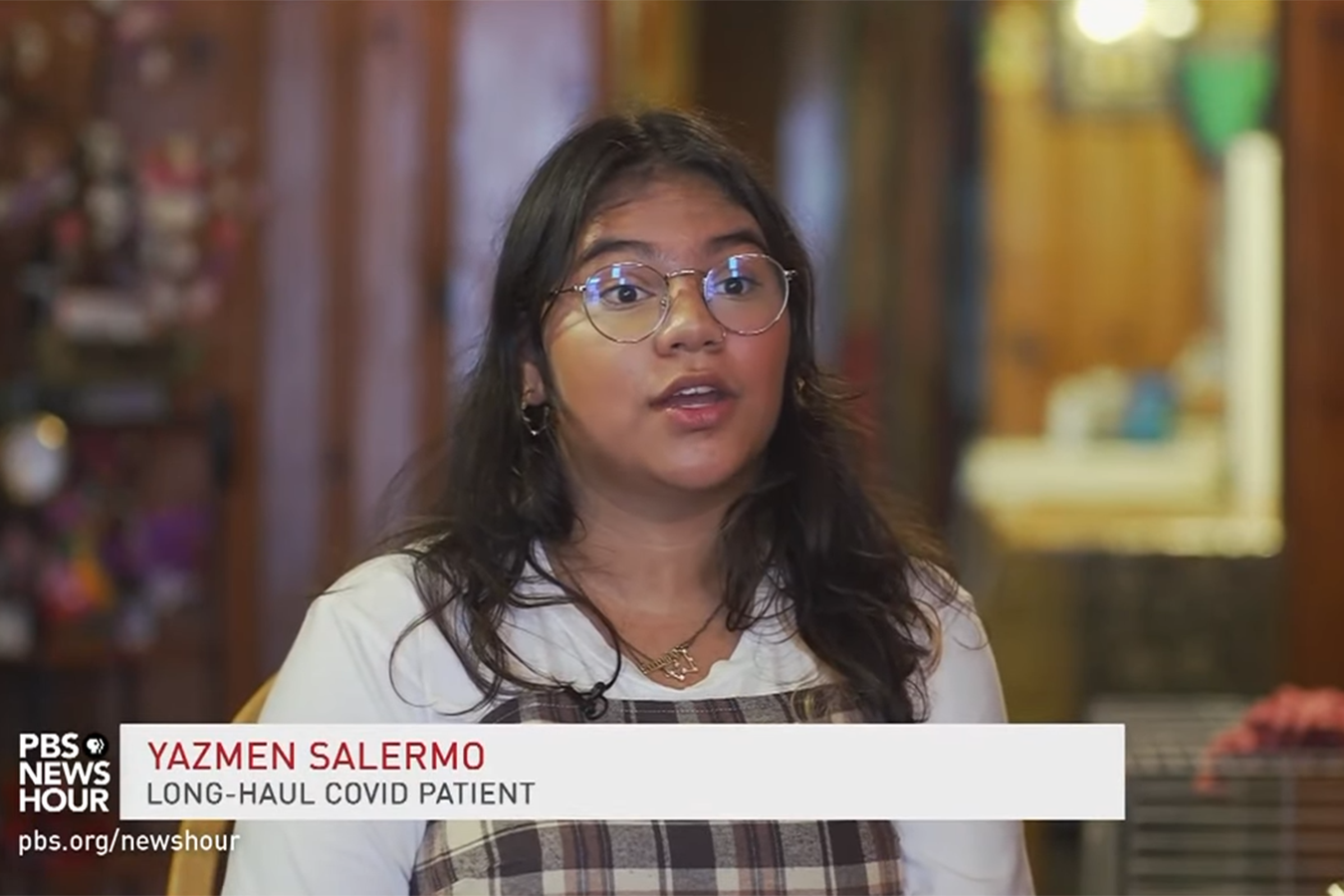 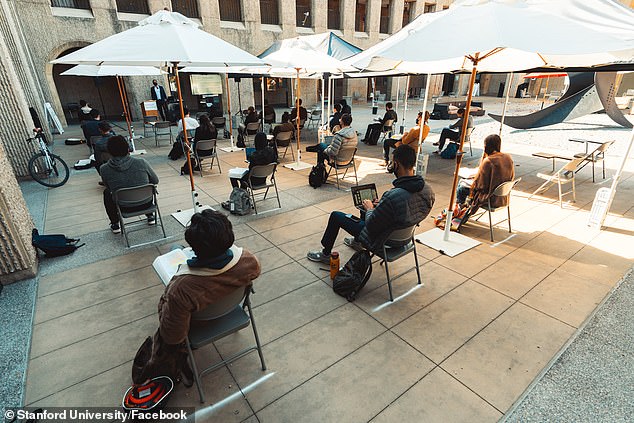 Covid US: 7 fully-vaccinated Stanford students test positive in a single week and are symptomatic 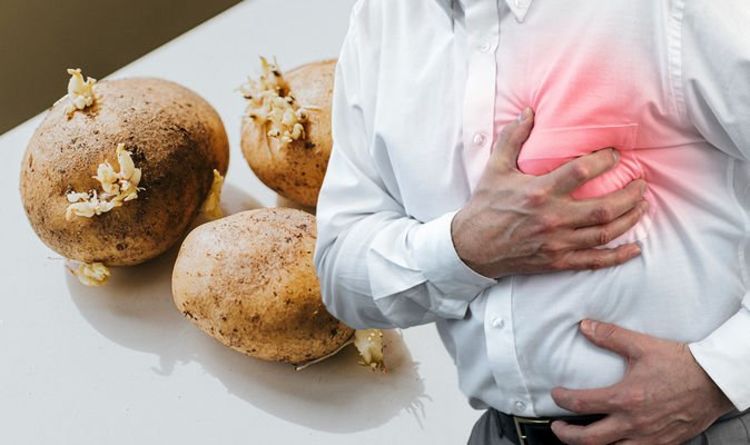 Tweezers of sound can pick objects up without physical contact